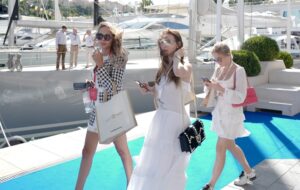 Viva, which debuted at the Monaco Yacht Show, quickly became the talk of the yachting industry. In the best traditions of the East India Company, the Dutch shipyard Feadship elevated naval construction to an art form centred on sustainability. Although it runs on diesel-electric power, it packs a powerful punch with significantly lower fuel consumption and emissions. The yacht’s main exterior feature — three tiers of wraparound glass on the superstructure — allows for a 360-degree view of the surroundings from almost anywhere onboard, making picturesque sunsets one of the yacht’s distinguishing features. It was designed by legendary designers from Studio De Voogt in collaboration with Azure. Even if you’re inside, Viva’s floor-to-ceiling windows will project your goodnight dreams onto the clear skies.

This 85-metre wonder can accommodate up to 12 guests in 11 guest suites. The yacht’s elegant silhouette was designed by the renowned studio H2 Yacht Design, and it features a 10-seat cinema, heated swimming pool, hammam, an aft deck jacuzzi, a cocktail lounge observation saloon, and a dazzling upper deck complete with a sky lounge. The yacht’s owner, an anonymous family man, oversaw the designer’s pursuit of a balance between functionality and convenience for his loved ones and refined beauty that will satisfy charter guests’ desire for chic and swish. Victorious has become a symbol of harmony during the Monaco Yacht Show: a surprising yet highly successful marriage between a traditional explorer with child-friendly features and a posh superyacht that draws attention from the first glance.

This superyacht is a tribute to both industry and humanity. The Artefact is designed to withstand any harsh conditions that the seas and oceans can throw at it, taking into account both nature and its owners. The Artefact, which is outfitted with solar panels and a battery storage system that allows the vessel to operate for a limited time without using its internal combustion engines, allows you to ride the waves carbon-free while surviving the harshest challenges the ocean has to offer. This is a refined version of the G-Wagon intended for sea travel. The yacht is modern, with an elegant design that has drawn attention to its distinguishing features. The Artefact, with a floor-to-ceiling glass central section and 740 square metres of curved and expressive glasswork, is now the world’s largest-volume 80-metre superyacht at 2.999 GT. It’s no surprise that this beauty belongs to the BlackBerry’s father, Michalis Lazaridis.

Silver, a 73.3-metre yacht born in Western Australia and raised on the seas, is an elegant ode to industrialisation. The yacht’s grey, military-style design screams “don’t mess with me,” but it hides a tender beauty and magnificent facilities that transform the ship into a marine gem that never ceases to delight. Silver is made of aluminium and is as practical as a Range Rover on water: it is modern, purposeful, and environmentally friendly. If you want to arrive at your yacht in style, Silver has a helicopter landing. Although the yacht has many luxurious amenities, one of the most appealing features is undoubtedly its navigation aids and cameras, which not only help you stay on the crest of a wave and avoid icebergs, but also allow you to observe marine beasts with “the dolphin cam,” a forward-facing underwater camera.